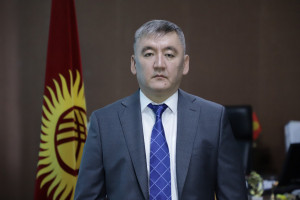 Kozhobekov Kudaiberdi Gaparalievich was born on December 30, 1975 in the Chon-Alai district of Osh region, Kyrgyzstan.
From 1992 to 1997 he studied at the Faculty of Physics and Mathematics of Osh State University.

- On December 25, 2009, under the supervision of Doctor of sciences, Professor A. SopuevKojobekovKudayberdiGaparalievich defended his dissertation of candidate of sciences on «Boundary value problems for individual derivative differential equations of the third order of mixed type».
- On March 27, 2014 by the decision of the Higher Attestation Commission of the Kyrgyz Republic he was awarded the title of Associate Professor in «Mathematics».
Contacts:

-On June 18, 2020, under the supervision of K.Alymkulov,Doctor of Physical and Mathematical Sciences, Professor, Corresponding Member of the National Academy of Sciences of the Kyrgyz Republic, he defended his doctoral dissertation on "Uniform asymptotics of bisectively excited differential equations solutions."